Latest evolution in the Class40

A quick reminder: the length of the hull is limited to 12.19 meters, the beam to 4.50 meters and the draft to 3 meters. The removable bowsprit must not exceed 2 meters and the average freeboard must be at least 1.08 meters. The minimum displacement is 4.5 t, several ballast tanks totaling 1500 liters are possible, the keel is fixed, no daggerboards or foils, no sophisticated rigging, and exotic materials, carbon, Kevlar or others are forbidden. The air draft of the mainsail is limited to a maximum of 19 meters, and the surface area of both sails, solent and mainsail, is limited to 115 square meters. Finally, two measures, which should prevent the design of a scow, taken at 20 centimeters and two meters from the bow, limit the width of the hull to 45 centimeters and 3.15 meters.

The first Class40 to attempt a solution adapted to the rule to create a hull close to the scow is that of Eric Levet for the Marc Lombard firm, which, as of 2016, is working in this direction. Carac, n° 150, a Lift 40, launched in 2017, has a full-hull forward, with a vertical side that goes around the boat. The hull is resolutely flat-bottomed, with very open U-shaped sections and a resolutely sharp chine. There is no longer any transition between the planking and the hull, the chine creates a clear break. The bow is raised, it is no longer the length of the waterline at rest that counts, but the ability of the hull to do some planning, and climbing the waves instead of crashing into them. 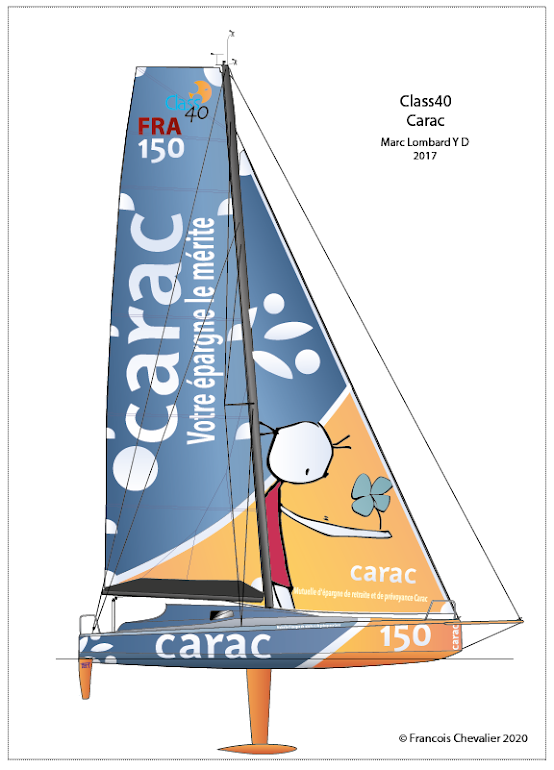 Carac is the first of the Lift 40 series from Marc Lombard. The drawing of the chine on the rear half is actually higher. The angle of attack of the bow is the beginning of a revolution in Class 40 hull design. 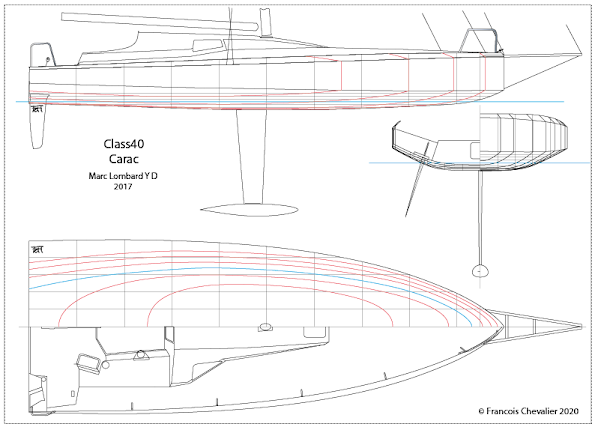 The general plan shows a clear evolution towards a scow version. In fact, some American scows have this kind of pinched bow. The water lines on the front are close to the chine and very curved. When heeled, the yacht leans on an almost flat plane, from front to back, making it easier to plan ahead.

The arrival in the Class40 circuit of David Raison, by Ian Lipinski (14 victories on his Mini between 2016 and 2017), and the Crédit Mutuel, n° 158, overturns all previous solutions, and goes beyond preconceived ideas. 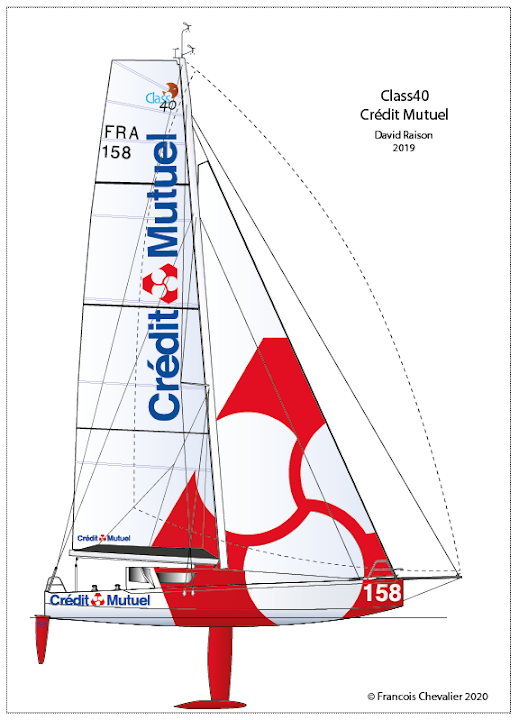 The David Raison revolution, which had been accustomed to its round noses for the last ten years, has won with its first Class40 in the Transat Jacques Vabre 2019, which crushes the competition, even though it is reputed to be top class. The round nose, made pointed by the obligation of a rule, is a thumbnail to all the traditions.

The aft half of the boat is at the maximum of the authorized beam, and the front is as wide as possible, within the limit of the famous 20 centimeters from the bow. As on the Lift 40, the hull is surrounded by a vertical ribbon; the hull, with its soft shapes, comes to rest under the chine. The bow is very elusive, and buoyancy begins well beyond frame one. The goal is clear, the sailboat must glide permanently, and raise the nose! In order to improve upwind performance, the keel sail is forward in relation to the ballast bulb, and to ensure greater stiffness of the hull, and to provide volume in case of overturning, the roof is extended to the first couple. 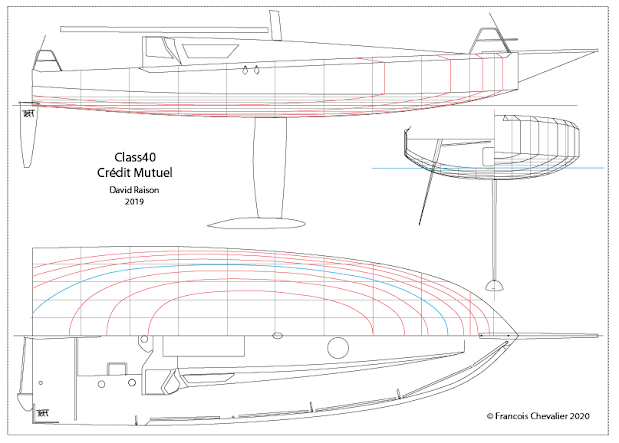 On the last America's Cup Class boats, we talked about a shoe box, but we're back in it again. There is a certain symmetry in the water lines below the waterline, which corresponds to the hull underwater. As soon as the sailboat heels, the water surface decreases drastically.

The late launch of the latest version of Sam Manuard's Mach 40, the Mach 40.4 n°159, Banque du Léman, for the Transat Jacques Vavre 2019 did not allow Simon Koster and Valentin Gautier to reach the podium. 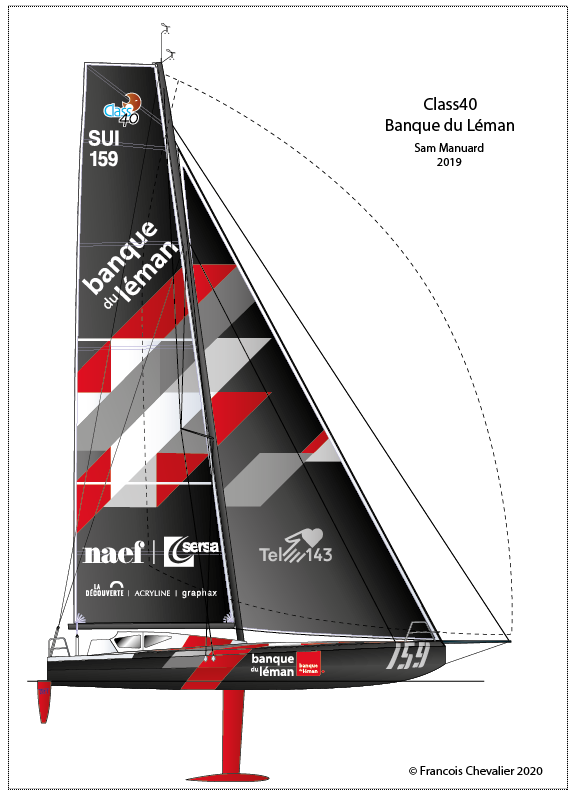 Sam Manuard didn't hesitate to move back to the mast step, the center of buoyancy and the keel sail. The silhouette is very powerful. In reality, with the breeze, the masthead bends and the lift operates, raising the bow to better surf the waves.

Manuard took up David Raison's ideas, but rounded the chine, with a rounder hull and tauter lines in general. The chine, quite high, is kept on the rear third. The waterline is slightly longer than on Crédit Mutuel, but the will to ride the waves is the same, even if the boat pushes lightly more water than its competitor. 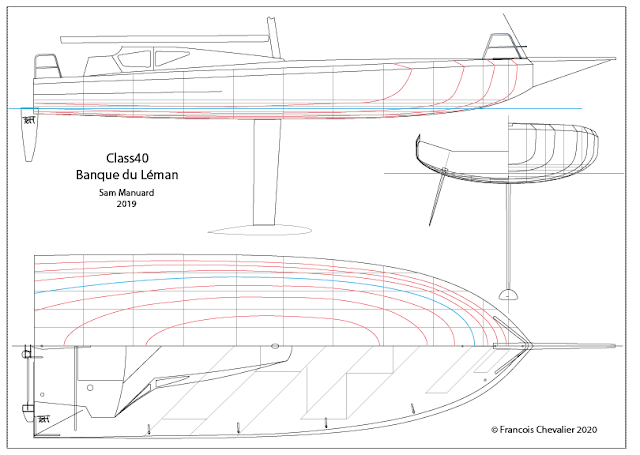 A hull all in roundness, hollow and taut, with a very full bow, sections very in roundness. The longitudinal sections, in red on the side view, show an important difference with the David Raison plan, whereas the two hull plans are very close, being obliged to fit in the rule measurement close to the bow.

The two Mach 40.3s that accompany Crédit Mutuel on the 2019 podium show that the scow solution is no guarantee of victory, but a new wind was blowing on the Class. 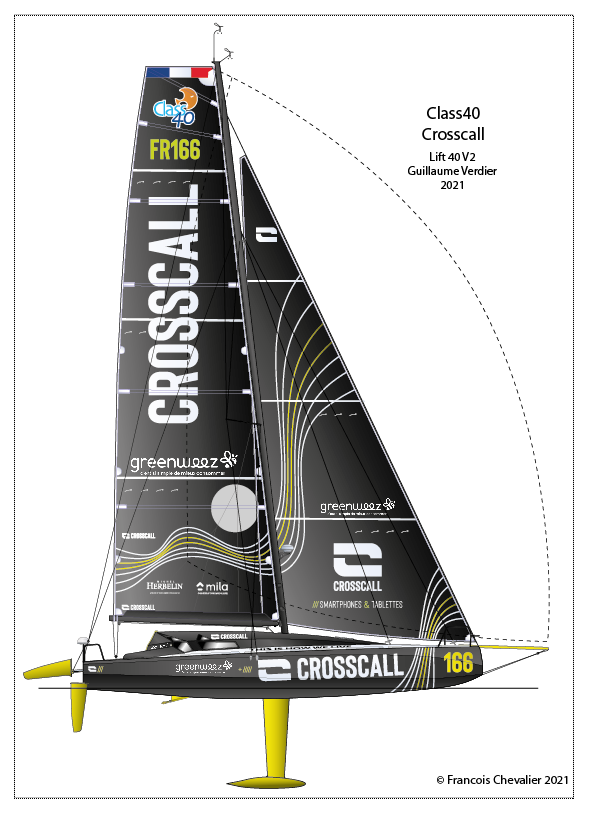 A forerunner of this novelty in the Class with its Lift 40 in 2016, Marc Lombard's firm, with Eric Levet in the front row, did not hesitate to look for ways to exploit the space that exists between the  two rule measurements. 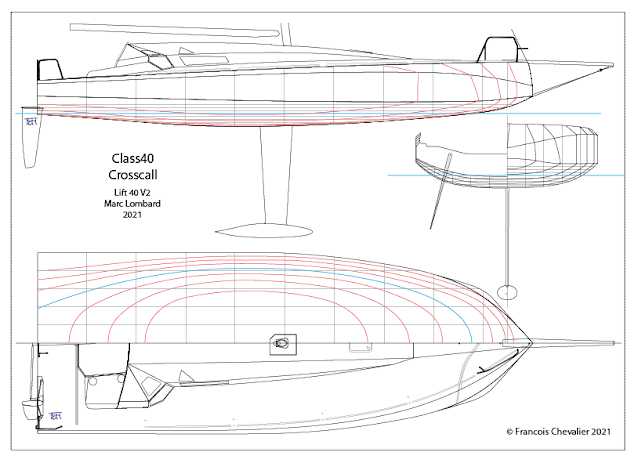 The designer's normal thinking, on his computer screen, was to draw a straight line from the bow to the first measurement, an angle of 96 degrees, and then round off through the second measurement to end tangentially (i.e., gently) at the maximum beam of 4.50 meters. In the first generation, the architects were reluctant to create a straight line for half the length, preferring to round it off slightly by favoring a maximum beam aft of the mast step.

However, in this space, between the bow line and the tangent at the two-meter measurement point, the firm formed a 35-centimeter-thick protuberance, which pushes the hull apart at a crucial point and extends the waterline at heel by almost 90 centimeters. Indeed, the disadvantage of the pointed bow scow is that it drastically reduces the waterline length from 10 degrees of heels. As long as the breeze is blowing, the shapes are tight enough that waterline length is not a concern, but in light airs, length is essential, as is the reduction in wetted area. This prominence could have been a handicap in terms of increasing the developed hull area, but the bulge was contained by curving the sidewall at this point and increasing the inclination of the planking which falls towards the bow.

The shape of the hull sections is faithful to the ideas of Marc Lombard's office, which favors a flat bottom, with a slightly incurved stern for better planning, and V-shaped sides to reduce the wetted surface area at the helm, by leaning on the chine. With fewer caricatured sections than on their first Lift 40, a bow that bounces fairly more, but straighter lines up front, Aurélien Ducroz and David Sineau's Lift 40 V2, Crosscall, n° 166, has everything it takes to take off. The keel sail has been brought forward for upwind sailing, while the mast is aft of the middle of the boat, and the rudder is now aft of the transom, providing balance on long reaching. 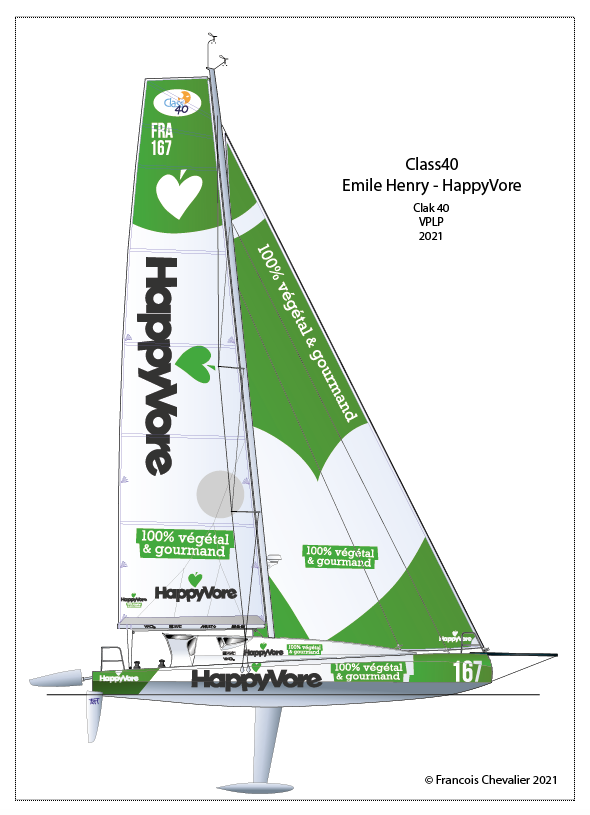 If the architects of the VPLP agency are known for having made progress in the Imoca class, they are newcomers to the Class40 with their Clak 40. Two boats have been built, and unfortunately, only Nicolas d'Estais and Erwan Le Draoulec's boat, Emile Henry – HappyVore, n° 167, will be taking part in this Transat. As on Ellen MacArthur's trimaran B&Q - Castorama, with which she held the solo world record in 2005, each side of the boat is given a totally different decoration. The starboard side is black, in the colors of Emile Henry, and the other is white and pale green. I had great difficulty in reconstructing these plans, as the boat was still being built at the time of writing. 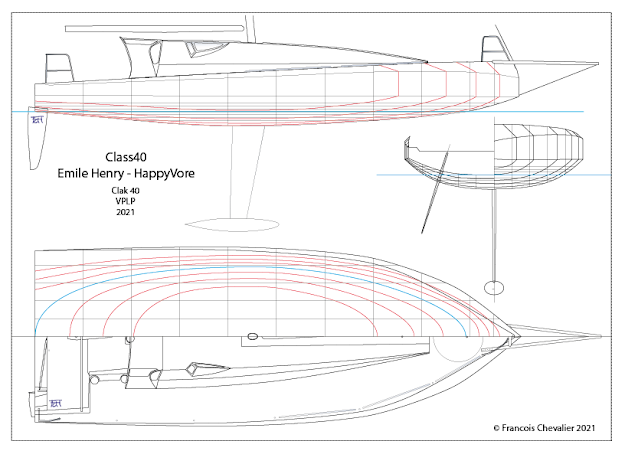 The architectural approach is relatively reasonable, with a fairly aft center of gravity and a top side that follows the shape of their 60', which reduces the deck area. The bow is high enough to lower the aft end of the deck as much as possible, thus slimming the silhouette of the boat and reducing the shoebox effect. The lower chine is fairly higher than on David Raison's Max 40s and the general shape of the hull is quite similar, with a slightly narrower transom. The rigging is the furthest back of all the Class40s to improve planning. 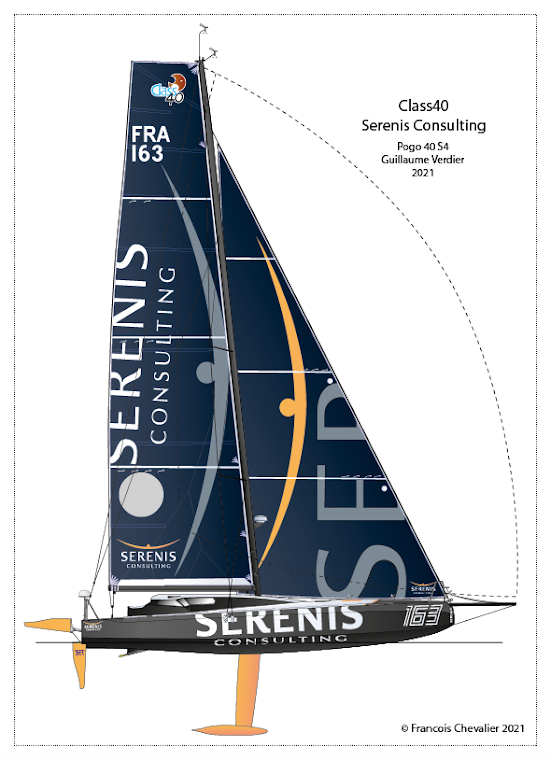 For the latest Pogo, the Pogo 40 S4, the Structures shipyard directed by Erwan Tymen selected Guillaume Verdier to renew its range. Of the three boats ordered, two are taking part in the Transat Jacques Vabre. Serenis Consulting, n°163, owned by Jean Galfione and Eric Péron, and Seafrigo-Sogestran, n° 172, owned by Cédric Château and Jérémie Mion. What is most noticeable about this plan is the boat's trim, which is resolutely sunken at the stern, with a fin keel in front of the ballast, which is very far back, and with the center of gravity of the ballast very far back. The profile of the hull bends at the level of the bow, sinking in a straight line to beyond the fin of the keel, rising with a point of inflection to end horizontally fifteen centimeters under water. The boat seems to be cambered, and ready to take off. 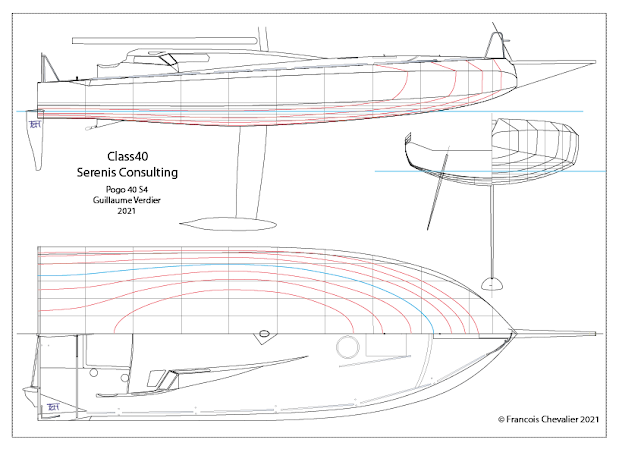 The sections of the hull are smooth, with no breakage, with a low chine close to the water and narrower than the upper chine. Clearly, stiffness has not been the priority. Indeed, the maximum beam, seen in drawings, is 8 centimeters less than the rule, i.e., 4.42 instead of 4.50 meters, and it is straight from the foot of the mast, and the lower chine does not exceed 4.15 meters in the beam. The round shapes correspond to a search for wetted surface, even if the stern can drag a large volume of water. Guillaume Verdier has concocted an original cocktail of speed in light airs, high average speeds downwind in a breeze and efficiency upwind in heavy seas.

To compensate for the volume of a rather short roof, the foredeck has a lot of deck camber. All Class 40s have the particularity of not staying upside down, thanks to a rule that imposes a lot of volume above the deck.

The sections of the first three Class40s highlight their differences. A sailboat cut to size for Carac, a shoe box on a taut hull for Crédit Mutuel and full curves for Banque du Léman.

The first thing you notice when you look at the six sections of the scow-shaped Class40s is that on the last three, the sides have been drastically reduced in height, to reduce the lateral wind drag, which is particularly harmful in light airs. This also reduces the developed surface of the whole hull, and puts the weight gained into the ballast.

This class is definitely destined for a great future.