The first four AC75s built in 2019—we have already featured them on the blog—have had their share of surprises. Built in view of the 2020 regattas in Cagliari and Portsmouth, they are now destined to be scrapped (!) as these races have been canceled.

As we could see, the design teams had come up with very different architectural solutions in answer to the new rules. As a result, it was not easy for them to be sure about what the second boat would look like. However, everyone retained that it was essential to design a slim hull under the main hull, a kind of long keel, to facilitate the take-off. 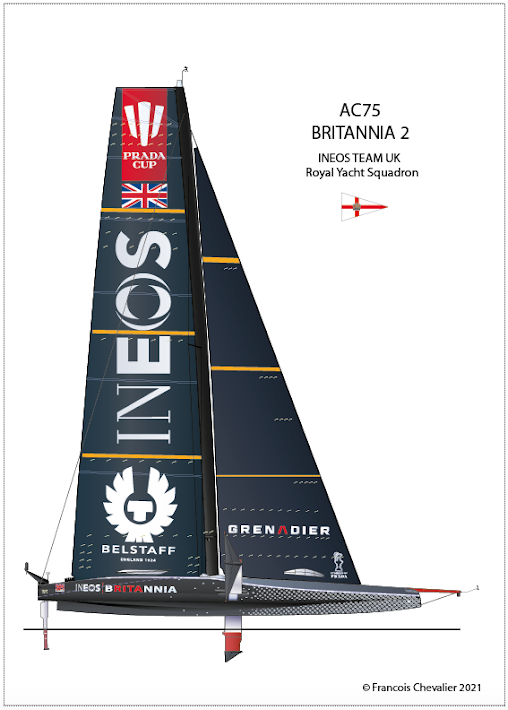 It’s never obvious to redraw the shape drawings of a boat for which we have no documents from the designer’s office. The design teams are increasingly comprised of hydrodynamic and aerodynamic engineers, and the amount of creative work left to the designers is increasingly reduced. For our own part, we’ve never spent so much time understanding and reproduce the lines of these yachts. It is difficult to reference, as usual, the designers’ personality. If it’s impossible to mistake a William Fife’s drawing with a Nat Herreshoff, from now on the ideas fly, as much as the crafts! And each one builds on a powerful idea to avoid slowing down in maneuvers or wind changes, and quickly recover speed.

Back to the first Britannia.

This one looked almost like a semi-trailer, with a bow as a cap and back boards that could help with beam wind propulsion. Another, more interesting feature was to dig a central tunnel in order to increase the surface area of the lower part of the mainsail. Consequently, the mast support was positioned higher on a console. Indeed, the rule stipulates that the mast base must be at least 1.50 m above the measurement waterline, at the same height as the sheer line. The rule also specifies the longitudinal location of the spar step. Amazing, by the way, these rules, where the characteristics are not called by name. We talk on a reference line or plane, but never about “hull length” or “freeboard.” By going down the central section of the deck, it’s possible to save more than two square meters of sail. However, this option has some disadvantages. Thus, this sailboat would win the prize for the largest hull development and, in general, this is not the purpose. From an aerodynamic point of view, the semi-trailer solution is not a panacea. The hull, very wide at the aft end, with a fairly round hull, adheres before take-off and slams during water landings. Very soon, it became obvious to add a central edge to soften the hull’s fall in the water.

For the latter yacht, Britannia 2, the design team has completely reviewed its copy. Exit, the wind tunnel. A large, flat-bottomed keel, which extends from under the bowsprit, quickly widens to end, deep enough, in a tapered position, ahead the rudder. The hull itself is lined with a second one, narrower, which begins in front of the foils to stop on the stern. It is designed for trim adjustments. In fact, the boat is made up of three superposed hulls. Britannia 2 is cambering while losing height. This prevents the hull from undergoing a violent rise in wetted surface area. 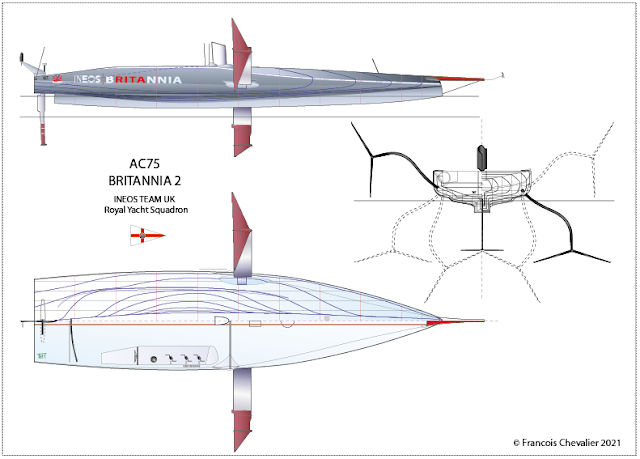 As all competitors have found, the AC75 does not need width at the waterline when at rest. Arms and foils operate as stabilizers. This is a feature that was little taken into consideration in the first generation, but that everyone has integrated since then. A great deal of aerodynamic work has been done to ensure good aerodynamic leak. However, the priority seems to have been given to a better penetration of the sea spray, with a freeboard diving well below the bowsprit. The outline of the Britannia 2’s bow appears to create less buoyant lift than its rivals, notably in light airs, when lifting onto its foils. When forced to increase the curve of the foils’ flaps, the British lose speed, especially in tacking. To make this set flying, wide foils have been retained, with initially wings “Stuka type,” allowing self-stability, then broad V-shaped wings, with a spoiler at the tips. The ballast is positioned in the central part of the wings, without creating a bump. Tricky choices, but which have been carefully fine-tuned by a outstanding staff and a continuously progressing development.

The first version of the New York YC Challenger AC75 focused on “aerodynamics.” The result was a big soap worn to cross the limits of the rule in a shape that provided less resistance.

When some observers realized that the next Cup monohulls would fly, they thought that only the foils would be decisive. So, farewell to the naval architects! But it’s not so easy to stay stable and up in the air, sea and the wind are by definition unstable. On the water—and above it—nothing is obvious. 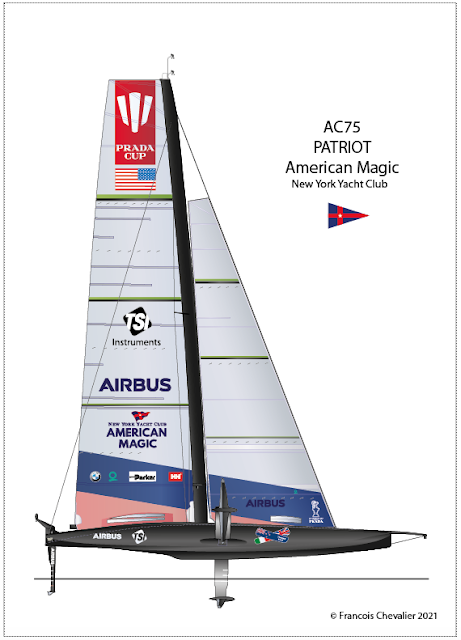 For their second racer, Patriot, the Americans have opted to refine the front shapes considerably while maintaining a broad deck but remaining below the allowed width. There’s not a single spot where the hull or the underbody would be flat. All surfaces are perfectly rounded. The forward sections are in a very open V-shape, which creates a figure suitable for lift at the beginning of speeds. The keel—thin—starts under the bowsprit and dips almost straight down to the arms of the foils. Then it climbs beneath the hull at the last part. The deck is slightly recessed to gain sail area, favor the wind acceleration in the lower part of the sails and increase the plaque effect by reducing its inclination. In this way, the center of gravity is dropped.

AC75s tend to tip forward during tacking, losing speed, going from 40 knots to 30 knots, even 25 knots if the hull contacts the water, and to 18 knots when the hull plunges deeper in water. 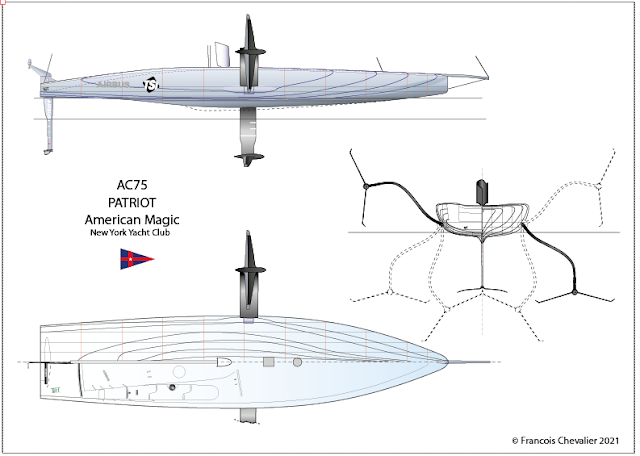 On the three views of the line plan, the hull is shown in the boat’s measurement position, i.e., at rest. In this configuration, the mast is inclined five degrees aft. However, when flying, the pitch changes and the yachts heel forward, often by about one point five degrees. Sometimes the curve can be as much as five degrees. However this doesn’t last. Only Luna Rossa 2 leans fairly less. In fact, the boat is in its trim when the bands on the sails become horizontal. On the other side, all the sail planes are represented in the highest-flying position. But this difference in display is not a problem for designers who only work with computer programs.

On Patriot’s water lines (see drawing view), the narrowness of the waterline, and therefore its thinness, can be clearly discerned, with particularly pinched water entrances. The foils are wide V-shaped, slim, with a shell in the center and two small spoilers folded down at each end. At the peak right from the first trials, it was without considering the progress made by the other teams.

Right from the beginning, the Italians had decided on a long keel and a symmetrical silhouette, with the freeboard measurement point culminating at the very foot of the mast. Below the waterline, the water lines were nearly balanced. The fact that cockpits are lateral is a result of multihull habits in which the central section has become the indispensable mainsail base plate, following the theory that the ideal plate perfectly reflects the sail above, like a mirror, with all its strength. 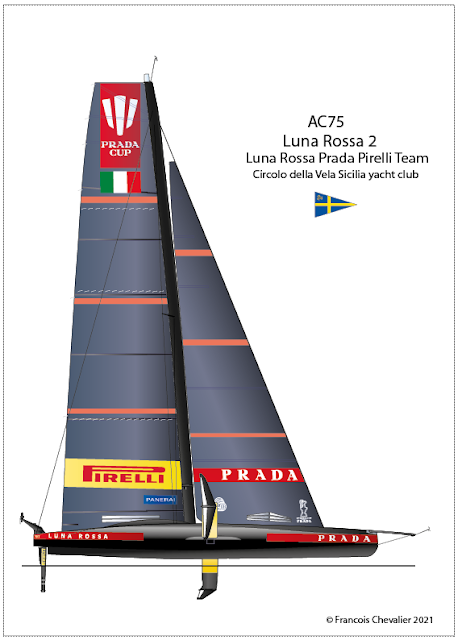 The version #2 of Luna Rossa doesn’t show any radical change, but the keel, still V-shaped, is deeper and the cut of the freeboard on the front is more marked. The front water lines are more pronounced. The foils remain in an inverted V shape, with a fairly large surface area, and the ballast is incorporated in the arms and foils, which are fitted with spoilers at the wingtips, with an almost straight trailing edge. 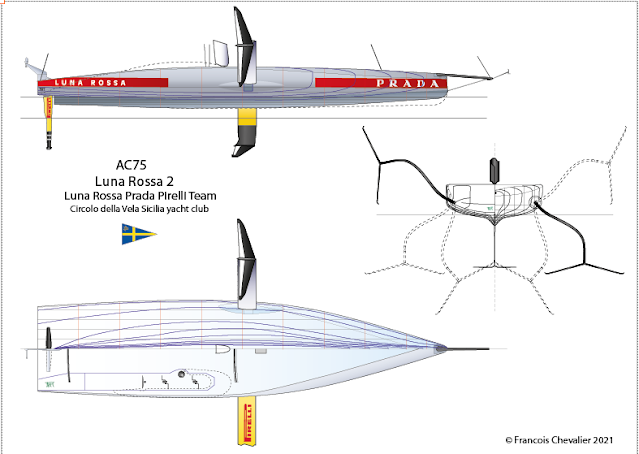 The double mainsail is kept in a battened position, without a boom at its foot. These winglets are known to reduce air or water turbulence at the ends. On airliners, the fuel saving is about 3.5%. With a relatively conventional concept, Luna Rossa focused its energy on maximizing its advantage and has enjoyed the benefits.

The initial departure of the defender boat, Te Aihe, had surprised: inverted multihull bow, canoe hull under a lightened TP52 hull, wide wing foils, without bulbs. The audacity of the New Zealanders had impressed. 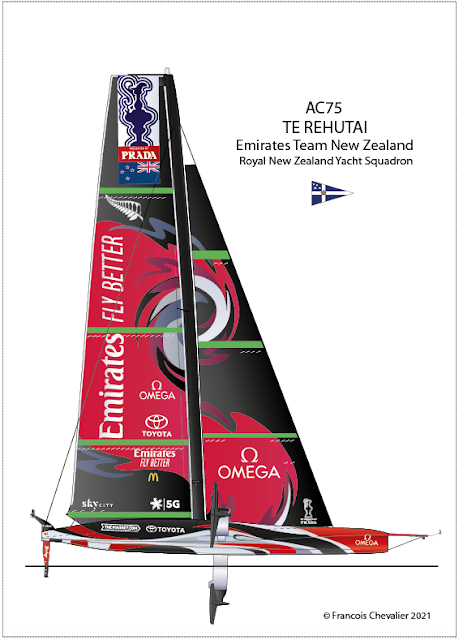 With Te Rehutai, the amazement is still full. A broad bow wafer with rounded edges, a keel that starts in the axis of the bowsprit, widening to the horizontally, while a true keel, curved, comes to stick underneath to die on the transom in the shape of a reversed cake mold. This emphasizes the two functions of the hull: to control the wind at deck level and, for the hull, to manage changes in trim and hull height. It can also be added that the aerodynamic problem is crucial, and that the design of the bow and the entire forepeak can play an important role in its ability to rise in the air. These shapes would still be basic on Te Rehutai if on the bridge, the channel did not start so early, from the tack of the Solent—rule obliges—so that the official support of the mast is carried by a 60-centimeter-high pylon. As a result, the jib and mainsail areas are increased, and the plate slope is decreased. Below, the flat hull flared at the stern to end in a very wide V at the transom. 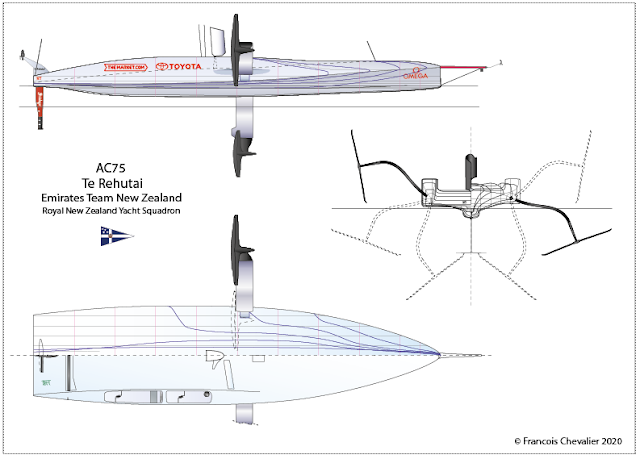 What is for sure is that all the ingredients that seemed to give an advantage over the first boats launched were found on this machine, whose design is innovative, to say the least. As on Britannia 2, two horizontal V-shaped rods at the masthead are used to trim the mainsail opening. The arms of the foils have a protrusion on the back, before the part left open to each contestant, which increases the buoyancy of the arms and thus the stability of the boat. The foils have a prominent, seamless bulb with slim, flat, chopper-shaped wings with winglets. Their newest design is just as thin, but less curved.

If the first flights seemed quite stationary, and some flights in light airs were amazing, the control of these monohulls is a matter for specialists who admit to spending a lot of time behind the screens. The America’s Cup has often been contested with a wide range of skills and disparate sailboats. The winning team will be the one that will have found the most multi-purpose racer, between technology and a sense of the sea, in such a way as to be able to explore the full potential of these monohulls of the future.