Eight new IMOCA, four architects, silhouettes that look alike, but for the sections, there’s nothing similar!

What about the fact that four talented designers have created such very various racers? It recalls the first four monohulls of the America’s Cup, so different, in spite of a rule that seemed restricted.

The last 2016 edition demonstrated that foils were the future. For the developers, the pure foil options, and hulls lightened by the foils, steered the prime designers to choose opposing alternatives.

Focusing on what each one explains, the approach of their reflection led them to reach innovative solutions. What is sure is that the winner will be proved right, and will set an original standard, unless the gauge evolves towards more hovering.

It’s still a bit early to know which one of the four brand-new IMOCA featured here is the fastest, between Hugo Boss, Apivia, Corum or L’Occitane en Provence. The very first one to really fly, Charal, showed us a wonderful display. Yes, she flies! And it’s well on the way for them to follow suit.

For a first IMOCA, such a revolution couldn’t have been expected. Nevertheless, Sam Manuard isn’t the kind of person to make a controversy. As an autodidact, he loves his job and design, building and sailing as much as he does. His Mini years led him to create in a very free rule, and the Class40 environment granted him confidence. Fourteen years that Sam is enjoying himself. The switch to IMOCA is the outcome of his successes. Sam didn’t give up, he watched IMOCA videos for hours in the rough sea, until he discovered the shape that could sail through without so many crashes and sprays. The quest for pure speed isn’t the goal if the boat regularly plunges into the wave. Consequently, a cigar, which relies on its foils for rigidity…

Juan K really loves to find the rule hole, it keeps him happy! But this rule is finally quite crooked… Compiled by the sailors and the designers who win, it hasn’t ceased to evolve, to avoid any excess and to ensure a minimum of safety, while preserving costs down. The fin keel and the mast are now standard, and the rollover tests, with the righting moment at small angles, are pushing the designers to temper their desires. Juan searched, tweaked the models, tried the impossible. Sometime, he developed unlikely shapes to cement his love of sturdiness. By creating a significant volume on the sides, he diverts the concern and manages to do light and rigid, the foils will do the job… 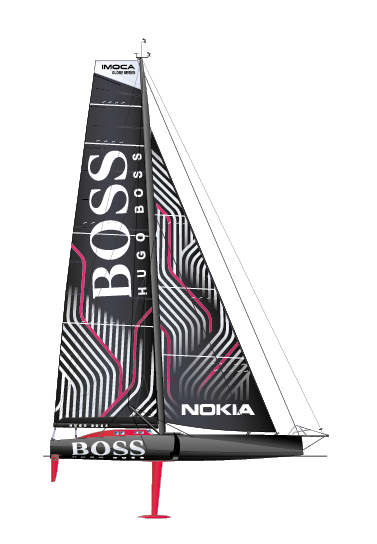 At VPLP, Marc (Van Peteghem) is in charge of the current business, cruise series and future projects, sailing cargoes and other vessels of the days to come. Vincent (Lauriot Prévost), for his part, focuses on racing. He left for Vannes a long time ago to enjoy the seaside, the Port de l’Arsenal (Paris) didn’t inspire him. But the fight has overtaken him, and you always have to win! Hugo Boss is the only plan somewhat caricatured, to better illustrate the differences; in truth, it’s rather more curved, Vincent notices it, yet admits that it’s the architectural side. The lateral back opening is designed to slide, to avoid hitting. As a result, the waterline is narrow, little wetted surface in light weather, improbable, in a round-the-world race. It must be said that the skipper is familiar with the way, and will sail to win…

It’s not easy to reach Guillaume Verdier, always on the other end of the planet, and on holidays, of course. Inventor of the AC75 and its concept, a hydrofoil monohull, without keel, with ballast in the foils, he works for the Cup defense. Usually, for the IMOCA, he gave his opinion at VPLP, and the team won everything it wanted. For Apivia, Guillaume started from a blank sheet of paper. With his friend Benjamin Muyl, they went around the constraints, known and measured by the optical fibers, and based themselves on the mast’s resistance to evaluate the limits of the boat’s righting moment, trying to reduce its ballast and weight. An original, but logical process, where the hull has to be perfect at small angles of heels, by skimming the waves…