THE (almost) LAST COPIES OF THE BOOK 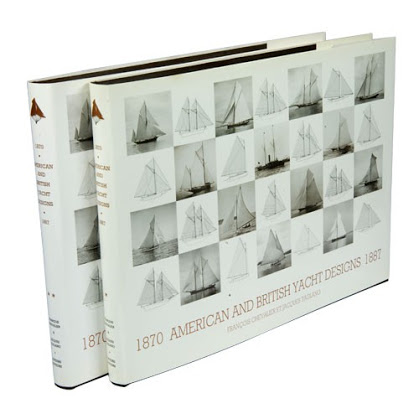 Which is the better way to introduce our second book?

By publishing the long article published in WoodenBoat magazine January/February 1994...

To the student of the evolution of American and British yacht design, there is perhaps no period more extraordinary than the latter half of the 19th century. To be sure, there have been many exciting designs produced in this century, but their evolution has been much more subtle, as designers seemed to create within fundamentally common themes. They were not, for the most part, inventing whole new forms, although they were certainly refining basic forms in exquisitely delicate ways. As a field of study, the history of the 20th century yacht design deserves deep and focused research, but it cannot possibly be understood without a complete comprehension of its foundations in the 19th century.

It is the two most intense decades of experimentation and development in that period—1870-1887—that the authors of 1870-1887 American and British Yacht Designs have turned their attention, through research, writing, and the creation of measured drawings. In fact, so focused is their attention that I wondered, as I examined their work, whether we at WoodenBoat would have been as determined to produce the book and magazine material we have on early yacht design if these books had been in print in 1980 or '81. For these authors have provided readers with a fairly broad look at some of the finest products of the period’s naval architecture practices, primarily through the fine drawings (labeled in English) of François Chevalier. But, of course, we would have published. After all, our editorial mission has always been to provide a broader context for appreciating the evolution of the yacht design during that and other periods. We were not always successful in finding good—or any—plans drawings, however, and it is here that these books surpass anything before them. For many yacht designers, and for historians who understand the principles of naval architecture clearly, 1870-1887 American and British Yacht Designs is a complete study, especially with the narrative work (published in both French and English) of Jacques Taglang which leads each chapter, and which accompanies each yacht’s plans. Drawn from a variety of sources, the text is necessarily brief and does not attempt to do more than place the type or design in the context of the others in the collection. The deeper understanding of individual yachts, or their place in time, would require more thorough scholarship, and the reference notes and bibliography offer an abundance of accessible resources. But this is not, I think, designed to be an intellectual experience. Rather, it is an emotional and romantic one, a celebration of the art and science of the yacht design at the very time when rule-of-thumb principles were being displaced by more scientific ones. And many of the great examples are here. There are yachts included whose hull lines I’ve never seen, including most of the schooners, from the majestic Ambassadress to the lovely Gitana; a few sloops and cutters, notably A. Cary Smith’s Priscilla and Cinderella, and William Fife’s exquisite Ulidia. There are also many more for which no sail plans have ever been published. In these respects, there is much that is new here; some truly historic events, and certainly some drafting “firsts.”

Among the most engaging of these for me is the hull lines of Nathanael Herreshoff’s steam yacht design Stiletto and Now Then.

As most enthusiasts know, Mr. Herreshoff did not draw hull lines, but carved models of his designs, from which offsets were taken to scale and entered in so-called Offset Books, which were then referred to by loft men who laid down the lines full size on the floor prior to building the molds. Because of his ingenious methods, it’s a virtual certainty that even Mr. Herreshoff himself had never seen the lines of these yachts drawn out. But because most of the original Offset Books and plans are available for research at the Hart Nautical Collections of the MIT Museum, Mr. Chevalier was able to develop the lines to scale with great fidelity, and the result is quite exciting. Other yachts' lines were created by painstakingly measuring half models in the extensive and impressive collections at the New York Yacht Club. (It’s fair to say that, without these collections, we would have practically no idea of what the shapes of certain historic yachts were like, and it is fortunate that the Club has seen fit to preserve its heritage.) Additional research was conducted in the extensive Ships Plans collections of Mystic Seaport Museum, and each plan drawing is attributed to its source. The only mystery to me is the sail plan drawing of the cutter Madge, which is itself an exciting event. While the hull lines have been well documented, preserved, and published, I have never seen more than a small sketch of the original sail plan, and certainly never seen a complete drawing as beautifully rendered as Mr. Chevalier’s. (The jib topsail looks a little awkward in size and placement to my eye, but I’m no yacht designer.)

The authors were inspired in this endeavor by a rare and valuable book published in 1887 entitled American and English Yachts, which featured fine yacht portraits by photographer Nathaniel Stebbins, brief descriptions of the yachts—perhaps by Stebbins—and an essay on yachts and yachting by Edward Burgess. There were no drawings. At the time, Mr. Burgess had successfully designed three America’s Cup defenders, and he was certainly one of the heroes of the yachting world. Because he had so little time for writing during his bright but brief career (cut short by a fatal illness in 1891), the essay affords a rare glimpse at his thinking. On the subject of his winning designs Puritan and Mayflower in 1885/86, his comments are particularly valuable. And, fortunately, the authors of 1870-1887 American and British Yacht Designs have chosen to include the Burgess essay, which helps to provide perspective on the book’s contents, as the original had done. Interestingly enough, Burgess was resigned to the fact that, in the future, all cruising boats would be powered by steam, and in time by electricity. His hope remained that “we can at least continue the interest in sailing matches, even if we cruise in the machine propelled craft.” The whole idea of the auxiliary cruiser was yet to be developed. All of the yachts originally featured in American and English Yachts are included in these two new volumes, with 20 more yachts added to provide a broader view. Among the most significant, perhaps, is the ill-fated centerboard schooner Mohawk, which capsized in 1876 while preparing to get underway. Her anchor was hove short and her sheets were fast when she was hit by two squalls and laid over on her side. Her inside ballast shifted, as did some of the cabin furniture, and she sank, with several people trapped below. Because the period covered saw the intense pitting of shallow center boarders (“skimming dishes”) against deep cutters (“lead mines”), resulting in the emergence in this country of the “compromise” type, there are many examples of each type included. Mohawk was an extreme example in the large center boarder category, and one look at her lines will show why she was so vulnerable. But where Edward Burgess would never have included a failed yacht among his selections, it is well for modern students to study such designs, lest we forget. Neither would Burgess have included sandbaggers, of which there are five splendid examples (including Annie, still preserved at Mystic Seaport), but they also help us to understand the extremes. There are several other yachts included that represent less extreme thinking, and which should be included in any study of the period in question. Fanny, an 1874 sloop built by D.O. Richmond of Mystic, is one, as is Schemer, whose model, like that of Madge, will be familiar to longtime readers of WoodenBoat. The yawls Florinda and Jullanar are included, and provide a welcome look at fine examples of a rig little used in yachts during this period.

As the authors note, there are a few plans omissions, due simply to the fact that no information could be found with which to draw them, but each of the examples is illustrated by some means, with a photograph where possible. There are several photographs I had never seen before, although I certainly should have. Perhaps the most ironic for me was the portrait of the sloop Fanny. When we published in 1989 our Fiftieth Anniversary Edition of W.P. Stephens’s Traditions and Memories of American Yachting (indisputably the single most important study of the history of American yachting), we worked hard to find original photographs, or improved versions of those initially used in the book, and in large part we succeeded. Since Stephens himself had been forced to use a poor photo of Fanny in attempting to illustrate her original single-headsail rig, I searched widely but to no avail for a better one, and had to settle eventually for another—taken after she had been fitted with double headsails. In reading through Mr. Taglang’s text on Fanny, I turned the page to see the very photo I had been hoping to find—showing her large single jib. Greatly enlarged from a small, rare Stebbins photo, it was perfect. Mr. Stephens and I had both completely missed it. (It will be found in our next edition, and so, perhaps, might some of Mr. Chevalier’s drawings, if we can arrange it. They are that important.)

In all, there are 71 yachts that make up the work, including 14 schooners, 6 catboats, 5 sandbaggers, 1 catamaran, 8 sloops, 17 cutters, 4 yawls, 9 compromise sloops, and 7 steam yachts. Apart from the drawings themselves, which are beautiful, the authors have taken great pains to reproduce the additional photos and illustrations as faithfully as possible to the originals, utilizing a duotone process which adds richness and depth to each page. The production of the books is library quality, with the same kind of fine paper and binding used in Taglang and Chevalier’s previous book 1851-1986 America’s Cup Yacht Designs, published in 1987, and reviewed in WB No. 82. Like the latter book, the trim size on these is 16½” × 12” (horizontal), which obviously makes them unhandy for browsing in the lap. But the format is dictated by the authors’ commitment to large-scale drawings, which any serious student appreciates. Of course, such a commitment must come at a price, and the price is no small matter. Yet for the serious, it may be an irresistible opportunity. To the modeler of traditional yachts, it may be a necessity, for many of these lines will be found nowhere else, and the story to be told in half or full models is a powerful one. There is not, nor has there ever been, anything quite like this book in the world. There have been large-format collections of printed plans (Kunhardt’s Small Yachts) and books of photographs (Nathaniel Stebbins and Henry Peabody) from the period, and there is the above-mentioned Stephens, which provides much of the information and more, but in smaller format. There has never been such a focused combination of the two in such an elaborate and enduring form. It is unquestionably a labor of love, and for any owner, it will doubtless be an object of love. Yet, though it is prohibitively priced for most of us, it deserves our attention and admiration, and surely belongs in any serious maritime library.

TO ORDER THE BOOK (two volumes), have a look in this blog:
http://chevaliertaglang.blogspot.fr/p/american-british-yacht-designs-1870-1887.html