The Louis Vuitton Cup will begin in two weeks.  First raced in Newport in 1983, the regatta's thirtieth anniversary will be celebrated.... in San Francisco.  The America's Cup will be held there September 7 to 21, 2013.

Here are the drawings of these flying cats:

It is amazing to see that the basic architecture has stayed consistent among the contending teams.

In the America's Cup, design strategies differ, and teams may feel pressure to assert that their ideas are the best.

Possibly as a result, there have been few alterations to the design of the hulls between each team's first and second boats.

The New Zealanders have modified their hull somewhat, optimizing them for a faster take-off.


In the end they have maintained reserve buoyancy forward even at the expense of significantly greater windage.
They have also simplified and improved the aerodynamics of their tensile structure. 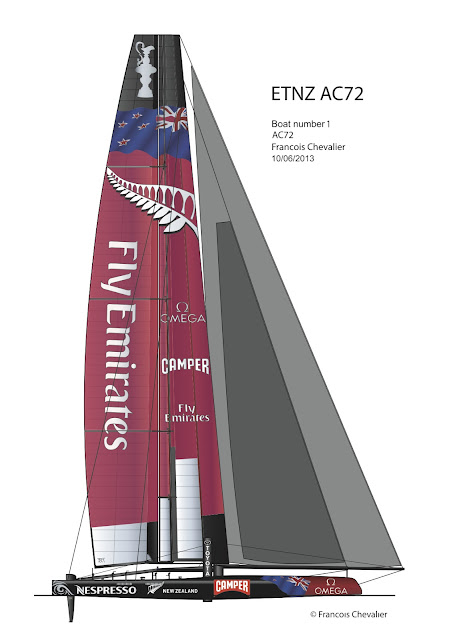 Their two wings are radically different.

The Americans of Oracle have focused from the beginning on lower resistance in both the water and the air, taking the risk of limiting reserve buoyancy at the bows.

The details are extremely neat, and the cockpits are deeper than ETNZ in order to shield the crew a bit.  However, looking closely at the sections, the forms of the forward portions of the hulls are more promising, relatively larger now in volume.

The Oracle Team USA wing is a showpiece in terms of greater flexibility in tuning the aerodynamic profile.

Next: We will be back soon to discuss appendages, and of course Artemis Racing and Prada, too....