The new flying mono hulls
of the America's Cup


Amazing, the difference in the architectural solutions chosen by the design teams for the first four ac75s launched recently. On their blank sheet of paper, or rather their monitors, they started from a rather basic box rule, with a hull length of 20.70 meters, a maximum beam of 5 m, a displacement of 7.6 tons including two foils with ballast weighing 1215 kilos each, and a few contingencies. Two limit measures, at 17 and 19 meters from the stern are imposed to prevent scows, a minimum freeboard of 1.50 meter in one spot; the position of the mast and the length of the boom are both determined. An important measure, which helped us to reconstitute these drawings, considering the distortion of shapes that appears in most photos, is the distance between the two axes of foil rotation, i.e. 4.10 meters. The distance between the two axes of foil rotation is 4.10 meters. The distance between the two axes of foils is 4.10 meters. In fact, the 75 feet, or 22.86 meters, corresponds to the overall length, including the bowsprit.

Indeed, on the drawing view, there are radically different designs, both on the general shape and on the drawing of the waterline. Of course, the sections also display a wide variety of layouts. All these hulls are designed to lift off as fast as possible, and to offer the best hydrodynamic performance during the transition periods, between displacement sailboat and flying boat, then the best way through the air when they are in flight. The AC75 is relatively light, its weight can be compared to a 3.80 meters surfboard, boarded by a 35-kilogram teenager.

Defiant, built by American Magic, is the narrowest yacht, its foil rotation axes extend beyond the width of the deck.
The hull is that of a surfboard, with a small raised section around it, wide and full, with very shallow depth.
The waterline is short, with a more stretched line at the front. At 15 degrees of heel, an improbable or transitory situation, the hull has a narrow volume guaranteeing the minimum area wetted and a good stiffness.

INEOS' yacht, Britannia, is at maximum three fifths of its length wide, and the bow is full, at the limit of the rule measurements. Its waterline is symmetrical at the bow and stern, oval-shaped, the sections of its hull are more V-shaped than the American racer.

When heeling, the waterline is very long, the shapes soft and planning. Its lateral sidewall provides it a greater stiffness than its competitors. The Design Team has found a small loophole in the rule and has not hesitated to create a gap between the deck book which should be 1.50 meters and the deck which remains at the same level as the front deck and remains 36 centimeters below the deck book at its highest point. The deck runs from the bow to the mast horizontally, then goes down to the cockpit level on the mainsail track, radically lowering the center of gravity of the whole deck.

Seen from the side, we can wonder about the usefulness of the great wall of the vertical side, with a surface area of more than ten square meters, we guess it is warranted by an additional wind surface area, while the other challenges have sought forms with a minimum one.

As Grant Dalton, manager of the 2021 America's Cup, announced, the AC75 rule allows a great deal of freedom in hull design, and the Italian Luna Rossa Design Team, Luna Rossa, has not been lacking in originality.
The shapes from the bow are straight, up to the foil support, then narrow on the aft. The waterline is close to a faultless lozenge, sharp on the front and on the aft. A kind of long keel runs from the bow to the rudder, with a very wide-open garboard.
It is true that this shape is the result of hydrodynamic research during the transition phase, between stationary and in flight, as well as its coming back when the lack of wind or any maneuver causes the sailboat to be lowered into its element. When Luna Rossa heels, its bottom is close to horizontal, but its keel must induce some distortions in the water lines.

While designing the lines of TNZ, Te Aihe, we noticed that the AC75 rule was radically different from the rules that are in use in France for Open, Mini Transat, Open 40 or IMOCA mono-hulls. We remember Jean-Marie Finot's speech, which made it clear in all these rules that there can be no inflection point on the sections of these sailboats. Finot dominated the races at this time and was keen not to be overwhelmed by radical architectural options, as some of them were at that time.

The AC75 rule only states that a horizontal can only cut the section twice. If this prohibits double hulls, and hollows in the bottoms, it gives way to an overlay of hulls, with inflection points.

If we consider the evolution of the central hulls of oceanic trimarans since they have been fitted with foil dagger boards, we can see that there is a real superposition of hulls, a bulky hull at the top, and a round hull below, to minimize the wetted area as soon as the hull is lifted a bit.
An influential member of Te Aihe's Design team, Guillaume Verdier, well aware of this evolution in multihulls, has been able to use this solution by superposing an ultra-light TP52 hull, with flat bottoms and flared sides, on a canoe hull. As soon as the sailboat is lightened by the foils, the submerged volume is reduced to a canoe hull, with a minimum of wetted area. When heeling, the hull slides on the sloped side, which is ideal for planning.

All these designers and engineers have worked, some of them since 2010, on multihulls. This has had a profound impact on the organization of sailboat maneuvers in the America's Cup. From the very first studies on the test yacht The Mule, the New York Yacht Club's challenge, American Magic, we can see two separate cockpits, one on the port and the other on the starboard side.

As regards the double sail, the challenges are still to analyze how best to maximize the profitability of the lower part of the mainsail and optimize the plate-like effect of the deck that tilts up to the mainsail sheet rail, between the two cockpits. While for years, on the America's Cup Classes, the winches had to be located on deck, the eleven crew members are hidden in their cockpits, offering no resistance to the wind. At the speeds reached by the AC75, we are talking about 50 knots, the apparent wind is such that the sailboat is upwind with a beam wind.

The fifth yacht planned, from the American Stars & Stripes challenge, has not yet been built, and already the challengers and the defender are working on their second yacht, which should be launched next summer, for the first ones.

It was interesting to review the benefits of the different architectural options from now on, knowing that the challengers do not have the right to confront each other before the first official meetings, the AC World Series in 2020. It is conceivable that the second boats launched, which are allowed to be launched from 20 February 2020, will have benefited from each other's innovations and that the differences will be less pronounced. 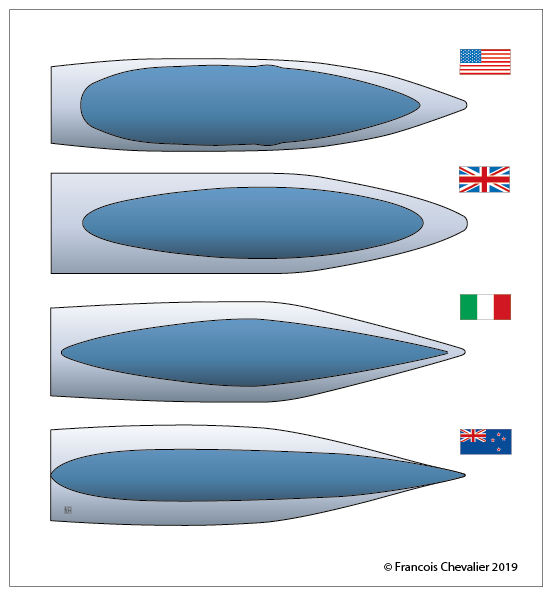 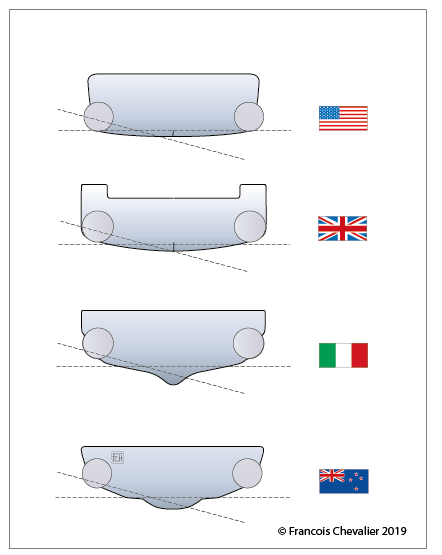